I am installing a new W7 VM with Siemens software.

Dear all, I never wrote here because allways someone had the same question and solved it.

But now I'm looking for the webux for tia portal v15.1 and can't found information about it. On a Siemens forum I saw that this package is only included on the Wincc Professional runtime DVD, but not on the engineering tool.
So, it can't be downloaded from siemens site.

Did someone installed it? Or have open a portal to internet using other methods?

a simple question for a beginner: once you use sim ekb install, is tia portal updater safe to use?
Top

Hello,
I was installing TIA portal pro V15.1 today. After installation with EKB. I want to open TIA portal V15.1 nothing happens.
follow the shortcut to the destination folder opening the .exe file directly (TIA Portal V15.1) --> Siemens.Automation.Portal application.
this gives me the next error:
configuration error sxstrace.exe should be used for more info?

someone can help me with this?
Top

this is the picture of the error i get (this is google chrome) my error is in dutch. i will take a screenshot of it ASAP.
https://imgur.com/a/XzzSEY0
https://imgur.com/CGQL1Fl
Last edited by smargana on Fri Nov 01, 2019 9:22 am, edited 1 time in total.
Top

Google Chrome is NOT part of TIA Portal

Has anybody a download-link for TIA Portal V15.1 with update 3 or at least only update 3?
You need a special confirmation of your account at the Siemens-Website to download it.
Top

You're right, it worked!

It is no longer necessary for the start values of the DB to be displayed on a connected HMI system for one cycle, if a download has occurred without re-initialization, for example, by changing a comment in the data block.
The online value is no longer sporadically displayed incorrectly in the STL programming language when monitoring complex blocks.
The message "the value addressed by the access is outside or not completely within the permitted range (CPU-specific variable or size of the data block)" is no longer displayed if a function block is called in an FC with the number "FC 0" which uses the "GetInstanceName" instruction.
A user-defined start page on the web server of the CPU is also displayed correctly if a link is made to a pre-defined CPU web page on this user-defined start page.
There is no longer a sporadic STOP of the CPU with the code 75D1 when diagnostic information is present at a connected ASi master.
CPUs with more than one PROFINET interface no longer receive the message "Temporary CPU error: Serious firmware exception error (internal system code: 16#00400001 16#1002012E 16#00010206) CPU changes to DEFECTIVE mode (system reaction)" when an incorrect hardware configuration (overlapping IP subnets of the X1 and X2 interfaces) is loaded into the CPU from the TIA Portal.
When switching from STOP -> RUN, the following sporadic message no longer appears: "Temporary CPU error: Serious firmware exception error (internal system code 16#00400001 16#10020010 16#00010246) CPU changes to "DEFECTIVE state (system reaction)" if the "D_ACT_DP" system function is used during startup to activate switched-off PROFINET IO devices with complex lower-level IO systems (for example, ASi master or IE/PB link).
The sporadic message "Temporary CPU error: Serious firmware exception error (internal system code 16#00000801 16#10028001 16#00008003) CPU changes to "DEFECTIVE state (system response)" when using multiple different communication types with encrypted connections in the CPU.
The sporadic message "Temporary CPU error: Serious firmware exception error (internal system code 16#00400001 16#10020026 16#00010246) CPU changes to "DEFECTIVE state (system reaction)" if the CPU in the motion environment works in conjunction with OPC UA communication.
If the "MC_InterpolateCam" instruction is called several times before the preceding interpolation is completed, the ID "80AB" error is now output at the block.
If drives are activated in the user program with ReconfigIOSystem, no RUN-STOP transition is required afterwards to be able to apply the change at the axis TOs.
The runtime fluctuations of the "MC interpolator" caused by the dynamic adaptation have been reduced by introducing "MC-LookAhead" for path planning with interpolating movements.
There are no more setpoint position jumps during the interpolating movement.
There is no more timeout error during the download after changing the axis configuration in the TIA Portal from virtual axis to real axis and changing over to the PROFIdrive telegram.
The current load torque is now calculated correctly if the length unit is inches.
The behavior of a following command from "MC_MotionInPosition" to "MC_MoveAbsolute" has been improved.
The "MC-Alarm 201" message no longer appears if a restart is triggered on the technology object in rapid succession.
The absolute encoder adjustment can now also be performed correctly at the hardware limit switch.
For analog axes, the actual speed is now calculated correctly taking the mechanical settings into account.
No more sporadic dynamic deviations occur when chaining "MC_MoveCircularAbsolute" to "MC_MoveLinearAbsolute" commands with the setting "dynamicAdaption = 2".
The velocity of linear analog axes (e.g. hydraulic cylinders) is calculated correctly during simulation.
The effect of the "Override" on interpolation movements is identical, regardless of whether commands are already in the job memory or whether it was only started after the "Override" was changed. 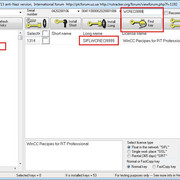 hello,
thanks CoMod , it's work.
Top

hello,
Please where I can find this key : 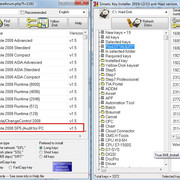 but no need install ALL "missing" keys

- it not required keys.
Top

Hi,
are these packages available anywhere?

is here anywhere the Hardware Support Package (restricted edition) "TIA_Portal_V15_HSP_restricted.zip" available? The download on the Siemens-Website is only possible for special registered Users.

What software is installed for the server-client in TIA Portal v.15.1?